Who Owns the “West Bank”? 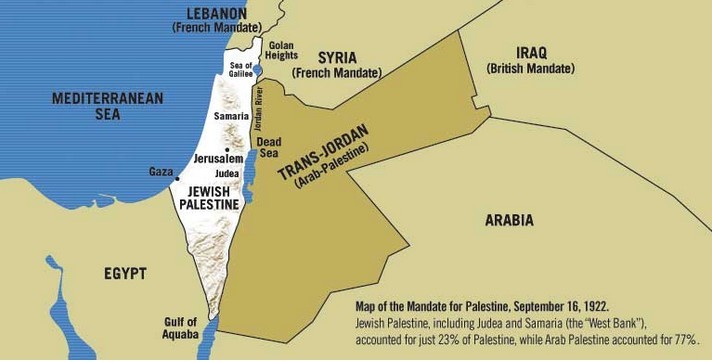 The ancient lands of Judea and Samaria, east of Jerusalem, have been part of the Jewish homeland for 3,000 years. Today Arabs demand all of it.

Judea and Samaria, the land where Jewish ancestors Abraham, Sarah, Isaac, Rachel, David and Solomon created Biblical history, was renamed the “West Bank” during Jordan’s brief, illegal 19-year occupation. Today, some 380,000 Jews own land and live in the territory, yet their rights are denied by Palestinian Arabs.

What are the facts?

Following the collapse of the Ottoman Empire after World War I, the Allied Powers, which were the only parties with the right or power to resolve ownership of vast tracts of the Middle East, allotted to the Jewish people the land west of the Jordan River, including Judea and Samaria. This resolution, made at the San Remo Conference, was effected through the Mandate for Palestine, which was adopted by the League of Nations in 1922 and assumed by the United Nations in 1948. This document, based on “the historical connection of the Jewish people with Palestine,” secured “the establishment of the Jewish national home.” Nothing since 1922 has changed the legal status of those internationally binding documents.

Much of the land allocated to the Jews, including most of Judea and Samaria, was taken from them by Egypt, Iraq, Jordan and Syria following Israel’s War of Independence in 1948, when the Jewish state was attacked by those Arab nations—the latter three of which were also established by the Mandate for Palestine. Jordan illegally seized the “West Bank” and east Jerusalem, and expelled all Jews from these Biblical homelands.

In fact, the territories of Judea and Samaria have never been part of any nation except the Jewish state. In 1967, when it was again attacked by Arab armies, Israel defeated the invaders and recovered the occupied “West Bank” from Jordan. It should be noted that during Jordan’s occupation of the “West Bank,” no Arab Palestinian movement emerged in favor of independence. Indeed, it wasn’t until Israel reclaimed the land and Jews returned to their ancestral home that claims of Jewish “occupation” were raised.

Today, most land in present-day Judea and Samaria is not privately owned, but rather is unsurveyed—without proven ownership. Israel claims about 30% of the public land in the territory. However, the Supreme Court of Israel has ruled that unsurveyed land in Judea and Samaria can be acquired by Arabs who cultivate it consistently. Arabs, through deed and cultivation rights, own about 95% of private land in the territory. Jews, however, are not granted similar rights, so Jewish farming on unsurveyed land does not entitle Jews to private ownership. Nonetheless, Jews own about 5% of all private land in Judea and Samaria.

Israel offers land for peace. Israel has a clear, millennia-old historical claim to Judea and Samaria, and it reacquired the territories defending itself against an aggressive war. In addition, Israel has an irrefutable legal claim to these territories backed by the 95-year-old San Remo Resolution. Nonetheless, recognizing that its claims are disputed by Arab neighbors, the Jewish state has shown uncommon willingness to share the land.

Starting in 1967, following the Six-Day War, Israel has offered to give up almost all the land it controls in the “West Bank”—plus a Palestinian capital in the eastern part of Jerusalem—in exchange for peace. Unfortunately, despite numerous such land-for-peace overtures by Israel, including two most recently in 2000 and 2008, the Arabs have consistently rejected them.

Not only do the Arabs reject any Jewish claims to land in Judea and Samaria, they have also insisted during peace negotiations that the territory be made judenrein—free of Jews. Worse, many Palestinian Arabs, such as the terror group Hamas, maintain that the entire land of Palestine—from the Jordan River to the Mediterranean Sea, including all of Israel and the “West Bank”—belongs only to Arabs. Today, official Palestinian maps do not depict the state of Israel.

How will the dispute over Judea and Samaria be resolved? Over Israel’s 67 years, it has become a world-class cultural, economic and military power. Its standard of living is among the highest in the Middle East. Clearly the Jewish state is here to stay. Yet despite its strength, Israel has shown willingness to negotiate and exchange land for peace. Sadly, this willingness has not been matched by Palestinian leadership. Until such negotiations are consummated, the “West Bank” will remain in dispute—a no-man’s land in which claims of ownership remain cloudy and contested.

(While Israel has clear rights to ownership of Judea and Samaria—also known as the “West Bank”—it has taken a practical position, offering to trade those rights and that land for peace with its Arab neighbors. As of yet, however, tragically, no Palestinian leader has been willing to compromise his people’s unrealistic expectation that all of Palestine—from the river to the sea—belongs only to Arabs.)

← Buzzwords of Bias If Israel Is as Terrible as Its Enemies Claim, Why Do So Many Palestinians Prefer to Live Under Israeli Rule? →