The Myth of Al Aqsa Mosque

The Myth of Al Aqsa Mosque

Summary ... Islam as a religion and Muslims as a group have continue to ignore Jerusalem as a non-entity and continue to bow toward Mecca when they pray. However, the myth that the Temple Mount is actually the place of Mohammed's alleged ascent continues to exist. And the West continues to believe the myth as the Mullahs babble about their non-existent history, harking back to the Philistines and other tribes long gone. 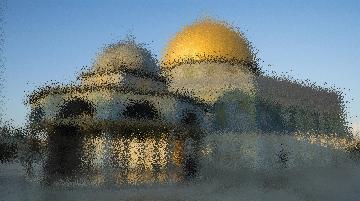 The myth of the Al Aqsa Mosque [Al Jazeera]

Presently, the Mullahs are calling for another "intifada" claiming that the Jews are undermining the Al Aksa Mosque and the place where their myths believe Mohammed launched himself into the Seventh Heaven. Where did this story come from? Does it meet any known time-line?

Mohammed died in 632 ce During his lifetime an imaginative story floated by an unknown follower was circulated about Mohammed's midnight dream ride on a flying horse to "Al Aksa". Serious Islamic scholars were embarrassed by this crass imagination that made no sense — as follows:

In the time it takes a clay water jar to tip and spill its first drop, Mohammed, in his mythical dream, flew from Mecca to the "the furthest place." In Arabic, "the furthest place" is Al Aksa. At that time Al Aksa (or "furthest place") would be either a mosque in Medina or Allah's Courtyard in Paradise. There was no mosque, no Al Aksa mosque, on the Temple Mount in Jerusalem in Mohammed's lifetime.

From 685-705 ce the Umayyad Caliph Abd-el Malik built the Dome of the Rock, also on the Temple Mount, Mount Moriah. (It is now called the "Golden Dome" after it was covered with gold by the King of Trans-Jordan.) Caliph Abd-el Malik, who lived in Damascus, wished to be viewed as Mohammed's heir and leader of Islam. He attempted to re-direct the Islamic religious/political compass away from Mecca towards Jerusalem and his sphere of religious/political power. The political thrust of all this was that al-Malik failed.

Islam as a religion and Muslims as a group continued to ignore Jerusalem as a non-entity and continued to bow in their worship toward Mecca. However, the myth was created among the (uneducated) Muslim/Arabs, that, by right of conquest, they owned the Temple of the Jews which existed as Solomon's Temple of the Jews for thousands of years before Mohammed and Islam. However, the myth took root among the Muslims — as history was pushed aside.

That childish myth has become factual history, as the Arab/Muslims claimed the Jews' most holy religious site, built thousands of years before Christianity or the beginnings of Islam. But, the West oohs and aahs as the Mullahs babble about their non-existent history, harking back to the Philistines (a warlike tribe of Phoenicians who came to the sea coast of Eretz Yisrael) and other tribes long gone.

The Al Aksa mosque was not considered a true holy site of Islam until Saladin, the Kurdish warrior in the 12th Century, needed an excuse to attack the Christian Crusaders who had taken Jerusalem. Saladin then claimed Mohammed's dream of Al Aksa was the mosque built on top of the Jewish Temple and, therefore, holy to Islam. But, their claims are accepted today as if they were not a backward, uncivilized culture but an advanced society of great thinkers and, therefore, worthy of being taken seriously. The media was presented with the scholarly history of the Jewish Temple numerous times, but they prefer the "mythical" version created by the Muslim/Arabs.

Sixty years after Mohammed's death, Caliph Abd el-Malik from Damascus did build the Dome of the Rock on the Temple Mount, over the site where the Jewish Temple stood in ancient times. It was later covered with gold leaf to become known as the Golden Dome. Caliph El-Malik's objective was to turn the political loyalty to Mohammed which was epi-centered in Mecca toward him as the next leader. Even the Media, always in a state of lazy denial must admit that every long dead visionary is followed by wannabe pretenders to the crown so he conveniently revises history toward himself and his new goals.

That ploy failed and the Dome of the Rock was not visited as a holy place as were Mecca and Medina. It eventually fell into ruins through neglect and lack of interest. Twenty years after El Malik built the Dome of the Rock, his son al-Waleed, built a nearby building and named it Al Aksa after the dream allocated to Mohammed. This story of how Mohammed was to travel to "Al Aksa," the farthest place is interesting. As the story goes, Mohammed mounted a giant white horse named el-Baraq, with great wings, the face and breasts of a woman and the tail of a peacock. Clearly, these were the fantasies of a zealous but ignorant follower of Mohammed anxious to expand the influence of the man whom he revered as his earthly deity.

Flying horses, flying dragons and gods able to fly were a common myth centuries before Mohammed, often grafted onto new religions. The story continues that Mohammed, in his dream, flew to the farthest place (al Aksa). But, the mosque named Al Aksa was not built until 80 years after Mohammed's death. So even in such minds with maximum imagination, 80 years out of sync tells us, there was no Al Aksa to support the myth.

It wasn't until the 12th Century ce that the myth took a new turn. Salah a-Din, the great Kurdish warrior wanted an excuse to attack Jerusalem and drive the knights of the Christian Crusaders off of the Temple Mount and out of the Holy City. The Temple Mount has been Holy for three thousand years because it was chosen by G-d — which is why the Jews built their two Temples there; the Christians later built churches there; the Muslims called it the Noble Sanctuary and built their two Mosques on top of the site of the Jewish Temples.

Since that time the Muslims have used the ready excuse of Al Aksa being attacked to gather forces and riot. This, of course, is happening right now as the Mullah and self-appointed leaders call for the Arab Muslim Palestinians to riot over the repair of the Mugrabi ramp.

Some will recall the years of the Grand Mufti of Jerusalem Haj Amin al-Husseini, who spread the rumor that the Jews were going to attack Al Aksa mosque. That was in 1929 and started the riots that killed hundreds of Jews. The Grand Mufti, "Haj" Amin al-Husseini, was a close follower of Hitler during WW II, hoping to entice him to bring his Jew-killing mechanisms to Jerusalem. The only condition Husseini set for assisting the Nazis was that, after they won the war, they would murder all the Jews in Palestine. You would not be surprised that Yassir Arafat was a nephew of Uncle Haj Amin al-Husseini. Arafat was born in Cairo named Rahman Abdul Rauf al-Qudwa al-Husseini. Arafat took over the PLO (Palestine Liberation Organization) which was established in 1964 by Gamal Abdul Nasser.

In 1929, the Arabs responded to Husseini's "rumor" and rioted in Jerusalem, Motza, Hebron, Safed, Jaffa and other areas — all over what was then British Mandate Palestine. The Arabs murdered a total of 133 Jews, wounding more than 300 wherever they could find them. In Hebron 67-69 Jews were murdered, with 58 wounded and women were raped; in Safed 18-20 were murdered with 80 wounded. The British evacuated the Jewish survivors, leaving their homes and belongings to be taken and occupied by the Arabs from 1929 to 1967 when Hebron was liberated along with the east side of Jerusalem, including the Temple Mount. 1929 was not the only time Husseini initiated attacks against Jews.

Reports today on CNN (February 12th) indicate that the Arabs have started to riot in Hebron because of the false accusations that the Jews are undermining the Al Aksa mosque in Jerusalem.

The use of Al Aksa is an excellent spark to inflame the familiar joyful hysterical rage so very near the surface for Muslims. The story continues that Mohammed flew to a certain spot in the "farthest place" which they have now named Al Aksa mosque in Jerusalem. It was "supposedly" the rock where Abraham was to have sacrificed Isaac in the Akeda. The "winged horse" el Buraq landed and left a giant hoof print in the stone.

The myth continues: In his dream Mohammed flew on el-Buraq to the Seventh Heaven where he meets all the Jewish prophets, Abraham, Isaac, Joseph, Moses and even Jesus. The story teller says: They gave Mohammed the stamp of approval that he was to be the last and only prophet of G-d. Ostensibly, Mohammed absorbed the older religions of Judaism (The Root) and Christianity. He claimed descent from the prophets as the foundation for the new religion of Islam.

At that moment in his dream, he flies back to earth in an instant — remember the drop of water at the beginning? Regrettably, the Media and even nations hesitate to question the basis of the myth of the midnight flight and the giant flying horse, el-Buraq. The Muslim people have accepted many myths and interpretations of the Koran as suits the needs and the imaginations of their Mullahs.

However, only since 1967 through the cleverness of Yassir Arafat, did they claim that Jerusalem is their third holiest city and give credence to another myth that of a non-people as a nation of history. Never before, whenever the Muslim conquerors had control did they establish a capital in Jerusalem. If you check out photos of the Temple Mount when the Muslims were in control, please note the grass growing up between the paving stones. The crowds of Muslims weren't there until the leaders started to remake their PR that Jerusalem is their third holiest city.

Do false claims and rioting work? Regrettably, they do. Reports just in (February 12) indicate that the Mayor of Jerusalem, Uri Lupolianski, no doubt, in collaboration with Olmert, Livni and Peretz, has ordered the work stopped to repair the ramp to the Mugrabi Gate (although not the rescue excavation).

One can hear the oft-repeated insults hurled at Israeli leadership by the Arabs that they are merely cockroaches who scurry away when the lights come on. I suppose the answer is to call in the roach exterminator. Somehow I sense G-d and the great warriors of the past are hiding their heads in shame at the cowardice of today's so-called Jewish leaders.

The Arabs will not stop rioting despite the "concession" by the Mayor. The Arab Muslims will still cry "Foul" because of the excavations continuing outside the Temple Mount. The more Jewish leaders show their weakness, the more they encourage riots and terror. Know that Islam has engaged the Free West in a religious war which the un-Jews of Israel's government cannot grasp.

So be wary of Muslims bearing myths.

← An Apartheid State or the Greatest Lie Ever Told? Security Council Resolution 242 According to its Drafters →