"I Support Israel; Let's Divide It"

There are many people who say they support Israel. And that's great! But for some people it's a blanket statement they proclaim in public speeches and interviews with the media. They place pro-Israel statements on their websites. They may write blog posts or letters to the editor about it. They sometimes argue the point on internet forums and they may join public protests in support of Israel. They may even write letters to the US President and their Senators and Congressmen. But for all the work that they do in support of Israel there is one thing that many of these supporters do that negates all their other work.

That one thing is their support of Israel giving away land to create an Arab (i.e., 'Palestinian') state in their midst. And for some reason these people don't see this as being in conflict with their statements of support.

Take the recent election of Scott Brown for example. He is the newly elected Senator from Massachusetts, taking the former Ted Kennedy's seat. He proudly proclaims on his website that he supports Israel. He has made public statements that he wants Obama to back off from his hard stance against Israel. By doing so, he has gotten many supporters of Israel very excited. And all of this sounds really great until you actually read what is written on his website:

Israel has made enormous sacrifices in an attempt to secure peace — including unilateral withdrawal from Gaza. I support a two-state solution that reaffirms Israel's right to exist and provides the Palestinians [sic] with a place of their own where both sides can live in peace and security. As our closest ally in the Middle East, Israel lives every day under the threat of terror yet shares with the US a dedication to democratic ideals, a respect for faith, and a commitment to peace in the region. Until a lasting peace is achieved, I support the security barrier erected by Israel which has proven successful in protecting Israeli civilians from terrorist attacks.

Take a very close look at the second sentence (highlighted above). Now, take a look at an excerpt from the speech made by United States President Barak Obama in Cairo on June 4, 2009:

... the only resolution is for the aspirations of both sides to be met through two states, where Israelis and Palestinians each live in peace and security.

How is it that two people with such supposedly diametrically opposed viewpoints make the same statement — almost word for word — regarding an act of destruction against Israel? (Do these guys have the same speech writer?) Despite all his glowing statements of support, in the end Brown stands with Obama and others in support of the division of Israel. In reality, his statement says that he supports the relocation of 300,000 Jews from their homes, and giving the land to a sworn enemy of Israel. How can that possibly be considered as supporting Israel?

In all fairness, Brown is obviously not the only person who does this. There are many individuals and organizations, some of whom give millions of dollars in support to Israel, who actually feel the same way that Brown does. Just check their websites or ask them outright. I believe you will be surprised.

Since this seems to be a major part of many people's alleged support, let's see what it really means to support the establishment of an Arab state in the midst of Israel.

First of all, it means supporting the relocation of 300,000 Jews from their homes in Judea and Samaria, many of whom live on land that has been owned by their families for several generations. As individuals and as a nation, many of these people have claims to this land going back 3,500 years. A large portion of the history of Israel took place within this part of Israel. In addition, there would be no place for these 300,000 people to go. A large number of the 10,000 Jews who were relocated from their homes in Gaza in 2005 are still homeless today, so where would these people think that 300,000 people would go? And yet many "supporters" of Israel endorse this type of action. 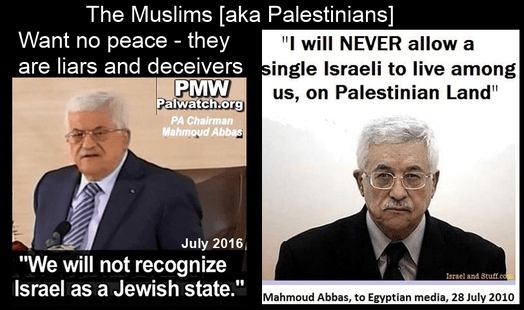 Secondly, in the 18 years since the world bought the Arab lie of "land for peace", it has been made very clear that the Arabs have no intention of ever living in peace with Israel. They have stated it publicly many times without any hesitation. They openly proclaim it in the media. They train their children in Western-funded schools to hate the Jewish people and to work for their destruction. The Western-backed Palestinian Authority (PA/PLO) seeks the death penalty for any Arab caught selling land to a Jew. The PA/PLO glorifies and honors terrorists who murder and injure Jews in terrorist attacks. The Western-backed PA/PLO Chairman, Mahmoud Abbas, recently threatened to use US-trained terrorists (aka "security police") against Israel if he doesn't get his way. And these "supporters" of Israel want the Jews to help these cold-blooded murderers create their own state in the heartland of their own country, on their own land?

Why is the world so blind to the Arabs and their hatred of Israel? How have they managed to enlist the help of virtually every nation in the entire world, while they openly continue their campaign of hatred and murder against the Jews? (Even Yasir Arafat hid his hateful statements, using the Arabic language. But this is no longer done.) The answer is quite simple: the world merely turns its head and ignores the truth. This is exactly what it did when it found out about the Nazi "Final Solution". The truth is the world wishes that the Jews would just "go away".

I'm not saying there is some global conspiracy to rid the world of the Jews (nor am I speaking of 100% of the world). What I am saying is that the existence of the Jews, especially in Israel, causes a problem for most of the world. As long as the Jewish people exist it reminds the world that there is a God and that each person is accountable for their deeds. This is a fact, whether they realize it or not. However, unconsciously they understand it quite well, as is shown by their actions.

The truth is that no one would ever dream of asking another nation to give away land to their sworn enemies in order to create a sovereign state in its midst, not even if those people were not sworn enemies. What would happen if the nations of the world demanded that the United States return the land it took from the native Indians? In that case, contrary to the Arabs, the Indians actually do have a case for the return of their land. But, as I said, no one would ever think of doing that (aside from the Indians and those who sympathize with their plight). So why does the world, particularly the so-called "supporters" of Israel, demand such a thing of Israel, especially given the fact that the so-called "Palestinians" have no right to the land?

For someone to say that they support the creation of an Arab state carved out of the heartland of Israel is to actually say that no, they don't support Israel. By saying they support the creation of an Arab state, they are saying that Israel is an "occupying power" in Judea and Samaria. All they are really doing is supporting Israel's right to exist but on a much smaller scale. They are, in fact, agreeing with the United Nation's stance on Israel — and the UN is not a supporter of Israel.

Being a supporter of Israel means embracing what Israel is and what it was created to be. I'm not taking about blind support. That should never be done. I'm talking about allowing Israel to be what it was created to be 3,500 years ago: to be a nation set apart from the other nations, to be holy unto God, and to answer to the God of Israel, not to the UN or to the US. Even without the Scriptural aspect, Israel is a sovereign nation and must be treated as such.

Support Israel, but support her for what she must be, not for what the nations want her to be.

And the next time someone tells you they support Israel, ask them if they also support a "Palestinian" state carved out of Judea and Samaria ... and be prepared to be surprised.

← Inappropriate Use of the Fourth Geneva Convention The West Bank of What? →